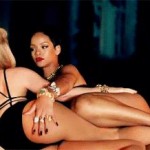 Ok, let’s just dive right in.  Contrary to a popular myth, all girls (women) are not gay…BOOM!!!  Sorry fellas in search of the threesome fantasy, the cat is out of the bag.  The evidence outlined to support this paper thin theory simple does not add up, and its time that masses of heterosexual women not only reject this stereotype, but vocalize their protest in large numbers.  It’s a ridiculous fairytale, a propaganda tool to woo vulnerable women into compromising positions that many live to regret.
One of the major rationales behind this misrepresented generalization is the female tendency to show affection toward one another.  Innocent hugs and kisses between female friends are overly sexualized and then these ladies are automatically “suspect.”  We dote compliments on one another, dance together at night clubs, make playful comments about a friends nice butt or great boobs and then all of sudden we’re lovers.  Sorry, but no!!!  None of these are necessarily homosexual in nature but rather quite the opposite.  All of these behaviors are basic, common components to female bonding and camaraderie and should not be taken out of context otherwise.
Another issue that supports the “all girls are gay” farce is the varying definition of what actually classifies one as a lesbian.  Is it a simple kiss or saying another woman is beautiful of sexy?  If a woman “experimented” once or engaged in group sex, is she  now labeled a lesbian or bisexual for life?  I say no to both questions.  A woman who is comfortable with her sexuality can very easily do any of these things without labeling herself or allowing herself to be labeled as a lesbian or bisexual.
Personally, I have heard of several accounts from women who have gone as far as to have sexual relations with another female only to conclude that she is most certainly not a lesbian or bisexual.  I could try to surf, but once the actual experience reminds how deathly afraid of swimming in open water unsupervised I am then I, of course, realize a surfer I am not.
The same rationale holds true with women who have dabbled in lesbianism or bisexuality.  Factor in that more times than not one or both women engaging in menage trois exploits are doing so at the request of and to gain favor with a man (so how gay are they really if they’re doing gay stuff for a man…things that make you go hmmmm), then you will be begin to understand why the mentality that all or most women have deep rooted lesbian desires or tendencies holds very little weight in reality.
Scientifically, the numbers do not support such as well.  Professor Dave Buss, author of Evolutionary Psychology estimates that throughout history only an approximate 1-2% of the world’s female population has been lesbian or bisexual.  On a whole, women’s maternal instincts, desire to be protected and provided for, and natural biological and chemical make up tend to nurture an attraction to men over women.
Researchers at Cornell University sampled 20,000 individuals across 80 different communities and of the women sampled only 14.4% identified as lesbian or bisexual, as opposed to 85.1% who identified as heterosexual, and 0.5% who abstained from identifying.  Statistics for the numbers of women who ONCE identified as lesbian or bisexual and then converted to heterosexual lifestyles mirror the numbers above with this transition occurring for most between the ages of 17-22.
Sure, in today’s society when sexual orientation is viewed as a human rights issue and not necessarily a religious one homosexuality, lesbianism, and bisexuality are more socially acceptable than 20 years ago and the stigma attached to such labeling has been removed.  Thus, the numbers of actual lesbians and bisexuals willing to openly embrace the title has increased…along with the numbers of women who are willing to at least experiment or express curiosity.
However, the theory that “all girls are gay” is still a gross overstatement of an unproven an unfounded hypothesis.  Are you more likely to run into a lesbian or bisexual woman than say a unicorn or leprechaun…of course.  Yet, myth is still the best adjective to describe this topic.

2 Responses to “Are All Girls Secretly Gay?”