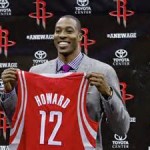 In the summer of 2013, Dwight Howard did something no Laker had ever done before.  He said no to a maximum salary offer to resign and took his league leading rebounding average to the Houston Rockets, for less money!  Lakers fans chalked it up to Howard’s weak mentality and his inability to handle the bright lights of LA and/or the harsh demands of perfectionist Kobe Bryant but in the summer of 2014, Carmelo Anthony, a close friend of Bryant’s, who has an actress wife who would have benefited greatly by being in Hollywood, also said no thanks to the Purple and Gold and resigned with woeful New York Knicks.  Just when we thought it couldn’t get any worse, Kobe’s wingman and future hall of famer Pau Gasol, who had been the second best player on two championship teams, rejected an offer to stay a Laker and signed with the Chicago Bulls.

How has the most successful franchise in professional sports since the Bill Russell era suddenly become a bridesmaid?  This was the team that Wilt Chamberlin and Kareem Abdul-Jabbar forced trades to.  They convinced superstars like Bob McAdoo and Sam Perkins to come to LA and ride the bench and persuaded Shaquille O’Neal, Glenn Rice, Rick Fox, Karl Malone, Gary Payton and most recently, Ron Artest, AKA Meta World Peace to come to the City of Angles for less money than they could have commanded elsewhere.

So what the heck is going on in Laker Land?  Why is it no longer a destination spot for Superstar free agents?  How have they become the second best team in their own building behind the Clippers?  What has led to The Fall of The Lakers Empire? 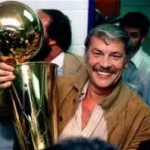 The Lakers throughout the years were blessed with brilliant minds like GMs Bill Sharman and Jerry West and Hall of Fame coaches Pat Riley, and Phil Jackson.  These men were geniuses at evaluating talent, blending egos, making trades, luring free agents, executing the Xs and Os of the game, motivating players and thinking outside the box.  The Lakers were owned by the late Dr. Jerry Buss who was considered by many to be the greatest owner in American professional team sports.  Buss gave us Showtime, Laker Girls, front row celebrities, the Forum Club and Prime ticket so fans could see every game.

It was Camelot on the hardwood but it has suddenly all come crashing down not unlike The Fall of the Roman Empire and like Rome, the Lakers Empire didn’t crumble overnight.  There were several factors that contributed to this sad state of affairs.  Here are a few of them.

No “Peter Principle for Pat:” 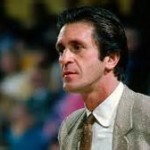 According to the Peter Principal, a successful employee is allowed to get promoted until they reach their level of incompetence.  It’s kind of the American way.  Pat Riley, a former Lakers bench warmer, who left Hall of Fame Announcer Chick Hearn’s announcer’s booth, to assist nutty professor Paul Westhead, rose from assistant coach to head coach and won four championships with the Lakers and was named Coach of The Decade for the 80s but Riley left for the New York Knicks and later the Miami Heat when the Lakers refused to give him a front office job.  Riley has since won three championships as the head of the Heat and ramrodded the signing of the LeBron James/Dwayne Wade/Chris Bosh mini dynasty.  Such a talent would be welcomed in Laker Land right about now. 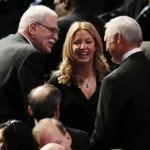 Question: What happens when you pair the greatest general manager in the game with the greatest coach of all time?  Answer: You win three straight championships then you egotistically play Game of Thrones.  Who wins?  The dude who’s dating the owner’s daughter, that’s who.  When Phil Jackson, who had won six championships with the Bulls and two, at that point, with the Lakers demanded more player input, it rattled the feathers of long time Laker Jerry West.  Someone had to go but with Jeannie Buss in Phil’s bed and in Dr. Buss’ ear, The Logo never had a chance.

Mr. Clutch temporarily retired and then took his genius to the Memphis Grizzlies and lately to the Golden State Warriors who are now two of the up and coming teams in the Western Conference.  Whereas West was known for finding talent like future Hall of famer Kobe Bryant, who was a high school player at a time when NBA teams weren’t routinely drafting high school players, A.C. Green who won three rings with the Lakers and holds the NBA Ironman record, Elden Campbell who lead the Lakers in scoring in the 90s, and All Stars Vlade Divac, Nick Van Excel and Eddie Jones, West’s replacement Mitch Kupchak and Dr. Buss’s son Jim Buss’s star draftee was the often injured Andrew Bynum. 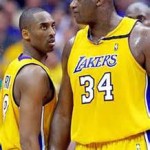 Two years after their third consecutive title and the summer after they unexpectedly lost to the superstarless Detroit Pistons, the Lakers were forced to choose between their warring superstars.  The situation had become untenable when Kobe Bryant, accused of rape (which he was acquitted for) threw Shaq under the bus by telling police that teammate Shaquille O’Neal had paid mistresses for their silence.  The report leaked to Deadspin and their already strained relationship became an all out war.

The Lakers chose Kobe and exiled Shaq to Miami where he teamed with Dwayne Wade, Alonzo Mourning and Gary Payton to win his fourth ring.  Kobe did go on to win two rings with Pau Gasol but top level free agents, other than the aforementioned Meta World Peace, while eager to play with Shaq, were reluctant to play with the ball hogging Bryant. 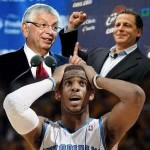 After the 2011 Lockout, the Lakers engineered a blockbuster trade sending Pau Gasol to the Houston Rockets and Lamar Odom to the then, New Orleans Hornets for genius point guard Chris Paul.   Less than an hour later, in an unprecedented move, David Stern, whose office had assumed ownership of the Hornets, blocked the trade at the behest of Caviler’s Owner Dan Gilbert, Dallas Owner Mark Cuban and Bobcats Owner Michael Jordan.  Whereas Kobe Bryant is a deterrent to free agents, Chris Paul is a magnet for them.  His presence on the Clippers, his ultimate destination, has attracted free agents and no doubt would have assured the presence of Howard and probably Carmelo. 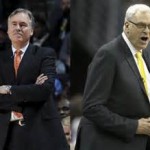 Okay, so let’s say you own a widget making company and the greatest widget maker of all time is available and engaged to your Daughter/Sister who owns the company with you, what do you do?  Why of course you hire a maker of gimmick widgets, whose widgets are nowhere near as good as your future son-in law/brother-in-law’s….Not! Not unless you’re the Lakers who inexplicably chose the ringless Mike D’Antoni over eleven time NBA Champion Phil Jackson.  They chose a coach who was adverse to post players and loves to run and gun on a team where twin towers Dwight Howard and Pau Gasol were the centerpieces and where his starting backcourt of Bryant and aging superstar Steve Nash (Plan B for Chris Paul) have a combined age in excess of 70 years.  They chose him over a coach whose claim to fame is the triple post offense which favors talents like Gasol, Howard and Bryant.  They hired him and pissed off Dwight Howard who had made it clear that he wanted to play for Jackson, who was still available, in the days before Howard fled to Houston and Jackson left to run the Knicks. 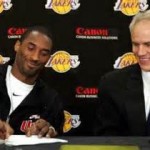 Pop quiz.  Your 35 year old superstar is just coming off career threatening Achilles surgery a season before two of the greatest players in league history (LeBron and Carmelo) are eligible for free agency.  Do you: resign him to a maximum contract before you see him play a game or hold off until you attempt to recruit the aforementioned James and Anthony.  The Lakers, in a real head scratcher, chose the former and killed their chances to sign not only Carmelo but Carmelo and LeBron James who were chomping at the bits to play together. 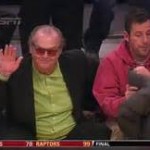 So there you have it.  Chris Paul is keeping LA a destination spot for free agents but for the Clippers not the Lakers.  Houston now has the services of former Laker Dwight Howard, Chicago now has the services of Pau Gasol, Phil Jackson has won out over his fiancée Jeanie Buss in the Carmelo Anthony sweepstakes, Jerry West is helping to build a winner in Golden State, Pat Riley has been in the NBA Finals for four straight years with the Heat and the great Dr. Jerry Buss is rolling over in his grave at his children’s ineptitude.  To paraphrase the late great Chick Hern, the Lakers’ dynasty is in the refrigerator.  The doors closed, the light’s out, the butter’s getting hard and the Jell-O’s giggling and Jack Nicholson is at a Clippers’ game.

The TOP 10 NBA Players of All Time: Revised Edition

WHO WINS: MJ vs. LeBron

By Augustus Golden One of the immense pleasures of sports talk is comparing “greats” from diffe ...

2 Responses to “THE FALL OF THE LAKERS’ EMPIRE”