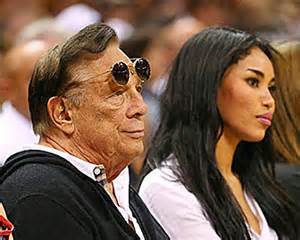 Despite the fact that V Stiviano recently ended the raciest regime of Donald Sterling, few groups in our society are as unfairly vilified as the gold-digger.  To some they are even more despicable than working girls.  They are generally viewed as heartless pariahs who prey on unsuspecting wealthy or well to do men for the sole purpose of worming their way into their affections then systematically separating those men from their money.  But let’s take a closer look at their real effect on our society.

Which image does not fit your conception of a gold-digger out with her meal ticket?

2)   A vertically challenged man with a leggy model?

6)   A handsome man with a gorgeous woman?

Probably number six because we expect women to want to be with handsome men regardless of their financial situation but when we think of gold-diggers we think of women being with men for no other reason than their money which means those men would not have access to beautiful women without their money pure and simple, gold-diggers provide, motivation which drives this nation.

Remember those pocket protector wearing geeks in high school who had to go to prom by themselves?  Remember how proud they were at the 10 year reunion when they showed off their trophy wives who just happened to be the receptionist at their IT firms, law offices or hospitals?  Don’t think for one moment that the thought of having a prestigious job that women are drawn to didn’t play into their career choices.

Remember that big goofy offensive lineman in college?  The cheer leaders would run through him more effectively than the opposing defensive line to get to the quarterback.  What do you think he was thinking about while he was bench pressing 600lbs?  Getting his mom out the ghetto?  I guess but you best believe the thought of the groupies he was going to encounter in the NFL helped him squeeze out one more set.

Remember those frail music nerds in middle school who had to sit buy themselves.  Trust and believe they were looking forward to the day they became hot recording artists or better yet super producers so they could couple up with up and coming wannabe sensations.

So to the women who date and marry such men as Bill Gates, Mark Zuckerberg, Flava Flav and Scottie Pippen, we salute you.  Without your gold digging ways we’d probably have no internet, no Facebook, no Flava of Love and no world champion Chicago Bulls.

So the next time you see a rich man with a gold-digger, don’t hate her.  Thank her for fulfilling a much needed job in our society.  It’s a dirty job, albeit a well paying one, but somebodies got to do it.

AN INTERVIEW WITH GOD.

Last night I was considering candidates for Fresh Takes’ first huge interview when it occurred ...

What if OJ had pulled the trigger?

Twenty years ago OJ Simpson took his infamous tour of the Los Angeles Area freeways in a white ...