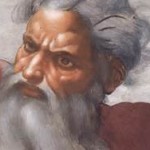 Last night I was considering candidates for Fresh Takes’ first huge interview when it occurred to me that the biggest interview I could possibly get would be with God.  I mean he hasn’t given one since Moses so I prayed for an interview with him and after a lot of thunder and a really cool light show he appeared!

I was a bit taken aback when he appeared as a really buffed, seventyish Caucasian male with long, flowing white hair and a matching beard and I think he sensed that so he immediately changed himself to look like Oprah.   Once again he could see I wasn’t feeling his image so he snapped his fingers and changed into someone who looked surprisingly like Rick Fox.  I smiled and gave him the thumbs up then we got started.

FRESH TAKES:  So God, was Jesus really your son?

GOD: Of course he was, as was Buddha, Mohamad and Krishna to name just a few.  You didn’t actually believe that I only had one begotten son did you?

FRESH TAKES: So which religion is the true religion?

GOD: I’m sorry, I don’t get the meaning of your question.

FRESH TAKES:  Which religion do you want us to follow?

GOD:  Why would I care?  Does the NBA care if you watch it on Direct TV, Time Warner Cable or Dish Network?  Does your mother care if you call her on AT&T, Verizon or Sprint?

FRESH TAKES: But wars were fought in your name regarding religion.

GOD:  Apparently they missed my commandments about taking my name in vain and not killing.  Listen, as long as they recognize the difference between right and wrong, good and evil and value the power of love while attempting to eliminate hate, they’re good.

FRESH TAKES: So by eliminating hate, do you mean it is okay to wage war on hate based terrorist groups as long as we do it in the name of love?

GOD: What are you a spin doctor?  Stop twisting my words before I turn you into a pillar of salt.

FRESH TAKES: So what are your feelings on races?

GOD:  Oh you mean the ingredients?  My plan all along was for them to all blend and eventually become one.  If I didn’t want the races to mix, I would have made them unable to do so.

FRESH TAKES: Are all people who divorce going to Hell?

GOD: Divorce is Hell.  When I made that rule, people were dying in their thirties, now if they stay away from fast food and big cities they can live to be well over a hundred.  Couples can get on each other’s nerves after all that time.  Just stay together long enough to raise your children and we’re good.

FRESH TAKES: So what about gays?

GOD: What about them?

FRESH TAKES: Well you did call them an abomination.

GOD: That again?  Look back then there weren’t a lot of people so I encouraged them to be heterosexual but I never called all gays abominations, I was referring to those Greek pedophiles but even if I did, why is everyone focusing on that one statement?  I also said rich men had no shot to get into Heaven but nobody dwells on that now do they?

GOD: Everyone looks like a perfect version of themselves at 25 and everyone is as cool as their Facebook personas.

FRESH TAKES: What are your feelings about atheist?

GOD: Love them.  They don’t question my motives, they don’t ask for anything and the look on their faces when they finally meet me are priceless!

FRESH TAKES: If there was an 11th commandment what would it be?

GOD:  Thou shalt not twerk.

I was about to ask him about life on other planets and why the Cubs were cursed but I was interrupted by the thunder and that light show again then I woke up in my bed.

“Oh, it was just a dream,” I said to myself until my daughter came into my room and asked, “Daddy, why was Rick Fox in our townhouse?”

What if OJ had pulled the trigger?

Twenty years ago OJ Simpson took his infamous tour of the Los Angeles Area freeways in a white ...

Why the World Needs Golddiggers

Despite the fact that V Stiviano recently ended the raciest regime of Donald Sterling, few grou ...

2 Responses to “AN INTERVIEW WITH GOD.”