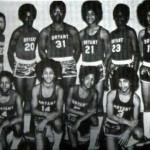 You never know who you know. I’ve been playing pickup basketball with my friend Paul Mitchell (#12 in the Bryant Middle School team photo) for years but it wasn’t until today that I learned he was a boyhood friend of Prince Rogers Nelson #3 and Prince’s brother Duane #21. Imagine that, all this time I was one degree of separation from my all-time favorite artist and the world’s greatest entertainer!

Paul has recently been approached by CNN to give an interview regarding his relationship with prince but he chose instead to write a simple Facebook post which we now share in the following paragraphs. It gives us a side of Prince that we hadn’t seen before and oh, yeah, Prince really did have handles and a great shot.

“I have been gathering my thoughts since Prince has passed; and God guided me to share about my childhood friend. Anyone who knows me, knows that I am pretty private, strong in my faith, and simply don’t post things on Facebook. Well, I am changing that today as I am prompted to do so.

I am not going to speak about the Prince you all know, but the one I grew up with.
Prince came into my life, and his brother Duane’s, when he moved to south Minneapolis in junior high. We were always together during the next few years. We played in his aunt’s basement, acting as if we were professional wrestlers like Verne Gagne and Mad Dog Vachon. We snuck into the gym to play basketball and got yelled at by our basketball coach every time we got caught. We played and coached basketball at Park Avenue Methodist Church. Sometimes we just hung out and talked about girls. Typical teenage stuff.

We talked a lot about families. And although Duane and I had challenging families, Prince really didn’t have one. He lived with his aunt, who was a wonderful woman, but she was older at that time and he spent most of his time at our house’s, pretty much living with me his senior year in high school. As my sister liked to complain, “drinking all our Kool-Aid.” The three of us were each other’s comfort when we were hurting; punching bags when we were angry; and friend when we just wanted to have fun.

My love for Prince is based on a friendship, a companionship that spanned our teenage years until me and Duane went to college for sports and Prince began his very successful music career. Prince and I would have such good talks in my tiny bedroom, and I had a glimpse of how amazing he was but I never really understood, I just had no perspective.

Just to be around us and be a part of a family, Prince played sports he never really played before, like football and baseball, and he was a really good athlete. The thing is, I never knew Prince as the artist he became and truly who he was. I knew him as one of my very best friends during some really challenging and formative years in my life. He was someone amongst a few I could trust.

Prince wasn’t perfect (who of us are). He could be mean and hurtful, but it was probably because of the pain he felt. He was always trying to measure up. I wish we all had let him know we loved him just the way he was. We were simply too young and prideful to communicate that. Looking back and working with young men like I do now, I see that. I feel in so many ways I failed both him and Duane, but I have faith in God’s plan. I know there is an eternal perspective that I don’t see. A perspective that they now know as I write this.

As we grew we lost contact. We reconnected when Prince would be kind enough to gift me back stage passes at his Purple Rain concerts in Los Angeles where I lived. Once he contacted me directly to have me bring my kids to a concert for handicapped children in Santa Monica. But things were never really the same. He had this amazing life, Duane was working for him, and I had my own life raising my beautiful children and building a career.

Later, we reconnected many times at the Glam Slam night club he owned in Los Angeles. I would visit with him and Duane there and it felt like old times. They were kind enough to let my company do some work in the club so we saw each other a lot, especially Duane. I realized how much I missed them both, but everything had changed, and even that was over 20 years ago.

Eventually we all lost touch, and then Duane passed away. That broke my heart. I should have been there for him. We all tried near the end but it just was not enough.
Now Prince has passed in a challenging way as well. Just last week I put in my phone to reach out to people close to him in hopes of finding the best way to reach him. I cried when I read that reminder in my phone the day after his death. God had put him on my heart, and I again learned that when He does that, we should obey those promptings right away, not when they fit in our schedule.

However his death becomes sensationalized, none of it matters to me. I just wish I was there for him and I will always remember and cherish the time we had as friends.
This bible verse resonated with me at Duane’s funeral. It makes me feel the same way today, as it is based on a loyalty that comes from a foundation of love that can never be broken.
“Where you go, I will go, and where you lodge, I will lodge. Your people shall be my people, and your God, my God. Where you die, I will die, and there I will be buried. Thus may the Lord do to me, and worse, if anything but death parts you and me.”(Ruth 1:16,17).
God bless you both Duane and Prince and may you rest in peace.”
-Paul Mitchell-

RATCHET IS NOT MY REALITY

So between Love and Hip Hop star Mimi making a sex tape and the Porsha vs Kenya cat fight on th ...

Should Niggaz Wit Attitudes (NWA) be in the Rock n Roll Hall of Fame?

Well let’s consider the criteria: “It must be 25 years after their debut album.” Well, my compu ...