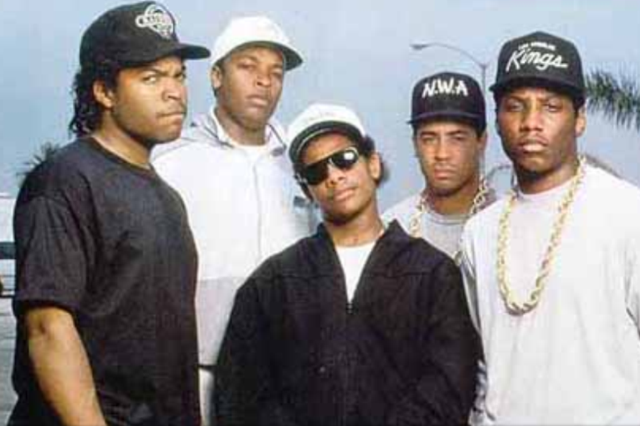 “It must be 25 years after their debut album.” Well, my computer-like mind tells me that from 1988 when they released “Straight Outta Compton” until now is 25 years. (Damn, I feel old.)

“The influence and significance of the artists’ contributions to the development and perpetuation of rock and roll.”  Well, no doubt about it, they had a huge influence, and let me tell you, it was significant! I mean, like Dr. Dre said himself, they started that gangsta shit. (That’s where I have a problem, but we’ll get back to that a little later.)

Like any great group, NWA spun off some great solo careers. Dr. Dre became a super producer. Ice Cube is, in my opinion, one of the greatest lyricists of all time. MC Ren, whereas not quite as good as Public Enemies’ Chuck D, was also a talented MC. Eazy-E, rest his soul, was a super personality in his own right and the founder of the group. Let’s not forget DJ Yella, who, along with Dre, was responsible for the cutting-edge sound of their music.

Their lineage is equally impressive. Snoop Dogg, Eminem, and Kendrick Lamar are direct descendants of NWA as is the Death Row Records label (which also gave us legendary tales like Shug Knight dangling Vanilla Ice out of a high rise window to force him to sign a contract). Diddy, Biggie, and Tupac all freely admitted to being influenced by NWA.

Looking straight at the criteria, I’d say the NWA hit all the marks for induction into the Hall of Fame. However, if I had a vote it would be no.

When I fell in love with hip hop, it was fun. DJ Jazzy Jeff and the Fresh Prince gave us “Parent’s Just Don’t Understand.” Kool Moe Dee gave us “Wild, Wild West.” Doug E Fresh and Slick Rick gave us “The Show.” NWA hijacked that fun and gave us bitches, hoes, niggas, and parental advisory labels. They glorified murder, drug dealing, gangbanging, and “beefs.” Clean acts were suddenly out, and Hip Hop entered a dark age where you had to be hard, lawless (preferably with a jail sentence), and disrespectful to women to give you street cred if you wanted to be heard.

Now, I know you NWA supporters will say, “it’s only entertainment,” but please miss me with that.  Music shapes how we feel about ourselves, how we view the world, and how we love. Songs like “Keep Yo Head Up” by Pac, “Fire and Earth” by X Clan, and “Stop the Violence” by BDP have had a profound effect on our society.

Here’s the good news for all you NWA supporters.  They will get into the Rock n Roll Hall of Fame despite this writer’s objections. Sorry, Dr. Dre. For starting that gangsta shit, you get no muthableeping thanks here.

ONE DEGREE OF SEPARATION: THE PRINCE WE NEVER KNEW

You never know who you know. I’ve been playing pickup basketball with my friend Paul Mitchell ( ...

RATCHET IS NOT MY REALITY

So between Love and Hip Hop star Mimi making a sex tape and the Porsha vs Kenya cat fight on th ...

One Response to “Should Niggaz Wit Attitudes (NWA) be in the Rock n Roll Hall of Fame?”