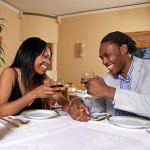 Men are so great because all they need is a possibility and the sky is the limit for them. There’s nothing like the enthusiasm a guy has when he first lays eyes on a lady. That enthusiasm is almost infectious. He’s so enthralled with her magnificence and beauty. He gives her all the glory, almost as if she’d just discovered the cure for cancer. A woman could say almost anything and still be regarded as royalty in his eyes. In that moment, to him, she is the most interesting individual in the world. His undivided attention may secure, in her, extra feelings of confidence. She feels even sexier while surrounded by all of this interest and enthusiasm. I say, enjoy it as long as you can because this enthusiasm is short lived, not because of anything you do wrong my lady friends. THIS is what I call: ‘I REALLY wanna hit this’ kind of enthusiasm.

Now, don’t get me wrong, men really do feel that eager enjoyment for you. It’s the thing that makes them want to change the world for you… tonight and even though it’s only temporary, don’t take it personally. You probably are super hot and deserving of all the praise, but he’d probably give that same enthusiasm to another hot girl, especially if he feels that numbness happening. In this process, a man’s judgment may be a bit clouded. He may tell you that you’re his wife to be. In this moment he may believe that you could make his life all better. 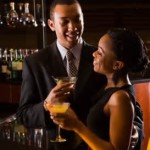 Once, a man whipped around me with that powerful enthusiasm and told me that ‘my kind of energy could make him a better man.’ He was so serious. My ego was pleased. It was like out of some romance movie or something. Good thing I had my best girlfriend Kate with me who brought me to the truth. She said to me so kindly, “of course you can make him a better man babe. Any man with a happy penis feels better.” I suddenly heard the scratch in the record. The lights came on. The voice of reason had spoken like the ‘great and powerful wizard of Oz’. So have fun with the ‘cat & mouse’ thing knowing this: Men cannot be sure that they want a relationship with you until AFTER they have had sex with you. 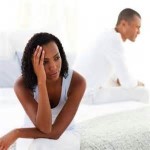 After a man releases with you in play, is the best time to get an honest answer to any question you like. Prior to that, he will promise you the moon while wishing your royal panties off in the process. For men, it’s like biological or something. Before a man has released that orgasm he has designated especially for you, he is eager, and has judgment that is extremely clouded. EVERYTHING is a good idea. ANYTHING is possible in their mind. They will travel hours to see you, climb a mountain, swim the Atlantic and do whatever is in their power for you. I once knew a girl whose ex-boyfriend chartered a plane for her because she’d missed her 8PM flight to see him. The next day, he sent her ass right back home, commercial flight, middle seat-economy ticket. 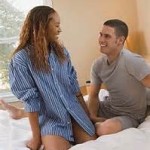 After an orgasm, things become much clearer to men. I was chatting with a guy friend of mine and he said he sometimes is eager to see a woman, he’s prepared his mind mentally and his body is following, and then, he’ll ‘squeeze one out’. After that, he says that if he still wants to see her, he knows that their connection is more than just her being a physical pawn in his game of pleasure. After ejaculation, he was relaxed and more logical about her and everything else. He saw things for what they really were and what he really wanted out of it. 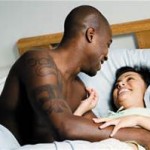 A man’s feeling is truly authentic in that moment. That kind of fervor is what makes the world go around and unless men are allowed to release that ‘great ball of fire’, they will absolutely go crazy. I always say: GIVE THAT MAN SOME NOOKIE! Please don’t send your boyfriend out into the world without his morning release. You can always spot the man, walking down the street, subtly salivating and crazy, LOL.

So enjoy those genuine man moments for as long as you can until you’re ready for the truth. After sex, IF you get the answer you were looking for, it’s time to put into practice keeping them there, always on the verge, wanting you this way.

La Rivers is Manhattan New York actress from Chicago Ill. She is also a well known blogger and goes by the handle biggamehunted.

Friends With Benefits: What’s in it for Who?

Sweetest Day has come and gone. Fall is here. Cuffing season recruitment is just about done. An ...